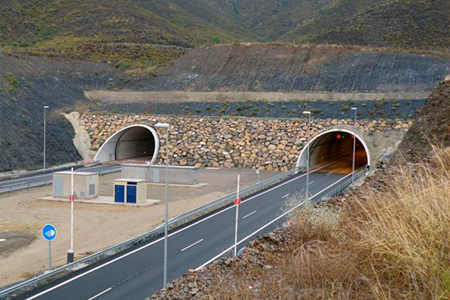 FCC Industrial and Matinsa win the tender for the modernization and adaptation works of the Loma de Bas (Murcia) and Sierra de Aguilón (Almería) tunnels. The objective of these actions is to improve the traffic and road conditions of the toll motorways, whose management has been assumed by Seitt. The works have an execution period of eight months and are aimed at adapting the equipment and infrastructure of both tunnels of the AP-7 toll motorway, Cartagena-Vera, to the security requirements. Although the tunnels currently have favorable operating conditions, it is necessary to update their facilities.

The project for both tunnels contemplates the surface adaptation of the pavement to achieve the required transverse friction coefficient value (CRT>60); the repainting of the roadway and conditioning of evacuation and emergency lanes and lighting to the requirements of the new regulations, as well as the adaptation of fixed signage at the tunnel entrances, the installation of LED graphic panels on porches outside the tunnel and variable message boards (VMP) at distances less than 500 meters.

Likewise, the provision of the wet hydrant network will be conditioned and the adaptation of the radio communications system will be carried out to capture FM broadcast and re-broadcast to users and the adaptation of the electrical supply system for the provision of double connection. Additionally, the entire control installation will be updated by installing new IP cameras, an automatic incident detection system (AID) integrated in both tunnels, and the electronics of the SOS will be changed for its move to IP technology.